New Jersey defines firearms at N.J.S. 2C:39-1f. As defined, “firearms” includes any device from which may be fired any solid ball or pellet. The definition specifically includes any air gun or spring gun where the propelling force is a spring, elastic band, carbon dioxide, or compressed air. 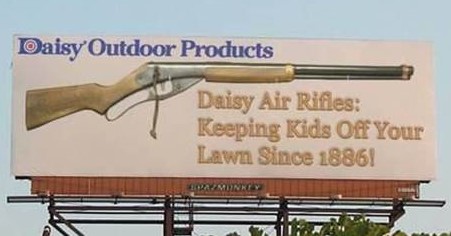 However, this definition also specifies that, for the air or spring gun to be a firearm, it must eject a missile having a diameter that is smaller than three-eights of an inch. (Thus a paintball gun is not a firearm, because of the size of what it emits, but it is a weapon.)

The New Jersey Code of Criminal Justice does not define “missile.” However, Webster's Third New International Dictionary considers a missile to be an “object that may be thrown or projected.” New Jersey adopted that definition in a case called State v. Mieles, 199 N.J. Super. 29 (App. Div., 1985). The ejection must be with sufficient force to injure a person. So if you're wondering whether New Jersey classifies that BB gun or air rifle you're looking as a firearm, the answer is, it probably does.


Federal law prohibits states from banning sale of BB guns and air rifles. More particularly, 15 U.S.C. § 5001(g)(ii) says that no State shall prohibit the sale, other than prohibiting the sale to minors, of traditional BB, paint ball, or pellet-firing air guns that expel a projectile through the force of air pressure.

15 U.S.C. § 5001(g)(ii) is helpful to New Jersey residents wanting to purchase a BB gun or air rifle. However, despite the limitations that 15 U.S.C. § 5001(g)(ii) places upon New Jersey, some words of caution are in order. Firstly, note that the federal statute protects only the sale of expulsions from force of air pressure. Thus BB guns and air rifles that use springs (or other mechanisms) to expel objects are not covered. Perhaps more importantly, the 15 U.S.C. § 5001(g)(ii) safeguard only prohibits sellers from selling; it does not excuse buyers from complying with New Jersey laws relating to weapons and firearms. Thus, for example, purchasers possessing a BB gun or air rifle are still required to have a New Jersey Firearms Identification (FID) card, unless some FID exemption is applicable.

Allan Marain is a New Jersey Second Amendment lawyer. He represents persons charged with violating laws relating to firearms. That, of course, would include BB guns and air rifles. He has successfully represented persons charged with firearms, and other weapons offenses, over forty-five years.

Persons charged with violating any New Jersey laws relating to firearms often have viable defenses. Numerous legal resources exist when such charges are filed. Allan Marain is available to review your BB gun-, air rifle-, and other firearms-related issues.