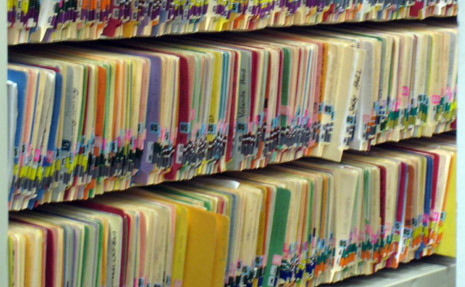 Before our discussion of the forms, we consider the wording of the mental health expungement statutes themselves itself. Two statutes are of particular relevance. They are N.J.S. 30:4-80.8, and N.J.S. 30:4-80.11.


In reviewing these statutes, it is first important to see exactly what it is that N.J.S. 30:4-80.8 enables to be expunged. Specifically included are records relating to: We discuss what is not included this list shortly.

Question 26 seeks related information. But where Question 24 inquired only into commitments and inpatient treatment, Question 26 asks about mental health attention both inpatient and outpatient. Crucial, however, is this: N.J.S. 30:4-80.11 expunges only the commitment itself. It does not expunge records of treatment, either inpatient or outpatient, associated with that commitment. Thus, even after a commitment has been expunged, divulgance of related medical examinations and treatment is still required.

Inasmuch as no medical records are expunged, has the expungement any value at all? The answer is absolutely yes, and here is why: So long as commitments have not been expunged, a person is absolutely forbidden to purchase or possess a firearm. This prohibition exists under both New Jersey and federal law. New Jersey will refuse to approve an application for a Firearms Identification Card. And licensed gun dealers will refuse to sell firearms under such circumstances. Once the commitment has been expunged, those absolute bars are removed. Purchase and possession of firearms are no longer illegal under federal law.

Even after the expungement, however, obstacles in New Jersey still exist. New Jersey still requires that purchasers and possessors of firearms hold a Firearms Identification card. Although the expunged commitment itself is no longer disqualifying, N.J.S. 2C:58-3c(5) requires the Firearms Identification card issuer to make a determination that issuance is not contrary to “the interest of the public health, safety or welfare.” In making that determination, the issuer will consider, among other things, all of the in-patient records and out-patient records, none of which were expunged. That is where the S.P.66 Consent form comes in.

S.P. 66 authorizes divulgence of mental health records. To the extent that it authorizes divulgence of unexpunged records, it is proper. But the signed S.P. 66 additionally constitutes consent to disclosure of records that may have been expunged. The provision in the S.P. 66 form that you consent to “disclosure of my mental health records, including disclosure of the fact that said records may have been expunged” is consistent with a legal opinion that arose out of Camden County. The name of the case in which that opinion arose is Application of J.D..

The J.D. opinion purports to require waiver of one statutory right, expungement of mental health records, as the price of exercising a different right, the Second Amendment right to obtain and possess firearms. The J.D. holding is consistant with a provision in the New Jersey Administrative Code. N.J.A.C. 13:54-1.4(b) specifies that “The applicant shall waive any statutory or other right of confidentiality relating to institutional confinement.” But no legitimate reason exists for requiring a would-be gun owner to surrender either of these rights. The J.D. opinion itself is flawed for no less than five different reasons: It is important to note that it was the Law Division of the Superior Court of New Jersey that decided J.D. The New Jersey State Court system provides two levels of appeal. The J.D. reasoning has never been tested on appeal. It should be.

How You May Deal with the S.P. 66 Consent Form:

In the absence of the Legislature changing the definition of what constitutes an “expungement”, Gun Lawyers in New Jersey™ believe that the S.P. 66 form cannot legitimately condition issuance of an FID Card upon consent to release expunged information. Ideally, every FID applicant will cross out the language that purports to authorize its release. But Gun Lawyers in New Jersey™ understand that persons with no expunged mental health history are not about to incur the difficulties that will result from that crossing out. That leaves, therefore, only those persons who do have an expunged history of commitments to a mental health facility. Those persons must make a very practical decision.

While a history of mental health treatment, including mental health commitments, may lead to denial of the application, that denial is not automatic. New Jersey State Police and local police departments will consider whether such treatment makes you a person “where the issuance would not be in the interest of the public health, safety or welfare”, as specified in N.J.S. 2C:58-3c(5).

If you believe that disclosure of expunged records is likely to not affect ultimate granting or denial of your application, then you are in more or less the same position as applicants with no expunged mental health history at all. But if you have an expunged history that, if disclosed, poses a substantial risk of denial, you basically have two options. Option one is to cross out those provisions on the S.P. 66 form that purport to authorize that disclosure. The FID application will then be denied. Remember, we reach this point only because it probably would have been denied anyway. You are then afforded the opportunity to challenge that denial in court. Option two is to “confront” the expunged history head on. Candidly disclose the history, but supplement that disclosure with information that dilutes, or even eliminates, the weight that that expunged history might otherwise have. This is likely to be a major project that would require much time and effort.


When the FID Card Application Is Denied, or Likely To Be Denied:

Gun Lawyers in New Jersey™ are available to represent persons whose mental health records cause applications for an FID Card to be denied, or whose applications are likely to arouse concern. But make no mistake about it: The process can be long; it will be frustrating; and it will be expensive. Federal issues exist that could take the case as high as the Supreme Court of the United States. There is no guarantee that, wherever it ends up, the effort will ultimately succeed. But it is a battle that should be fought.